Ever wonder how the mushrooms you see in the grocery store are grown? The white button, brown mushrooms and Portabella mushrooms actually start in a lab. Cereal grains are inoculated with mushroom spores and incubated until they develop into spawn or ‘mushroom seeds.’ 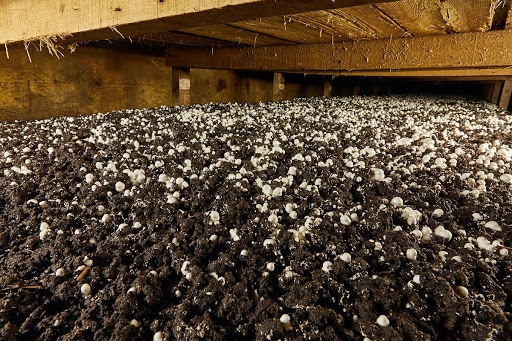 Next, at the mushroom farm, growers carefully prepare the growing medium for mushroom production. Farmers combine materials like hay, straw, corn cobs, cocoa shells, and horse or chicken manure and place it in stacked wooden beds mixed with the spawn. 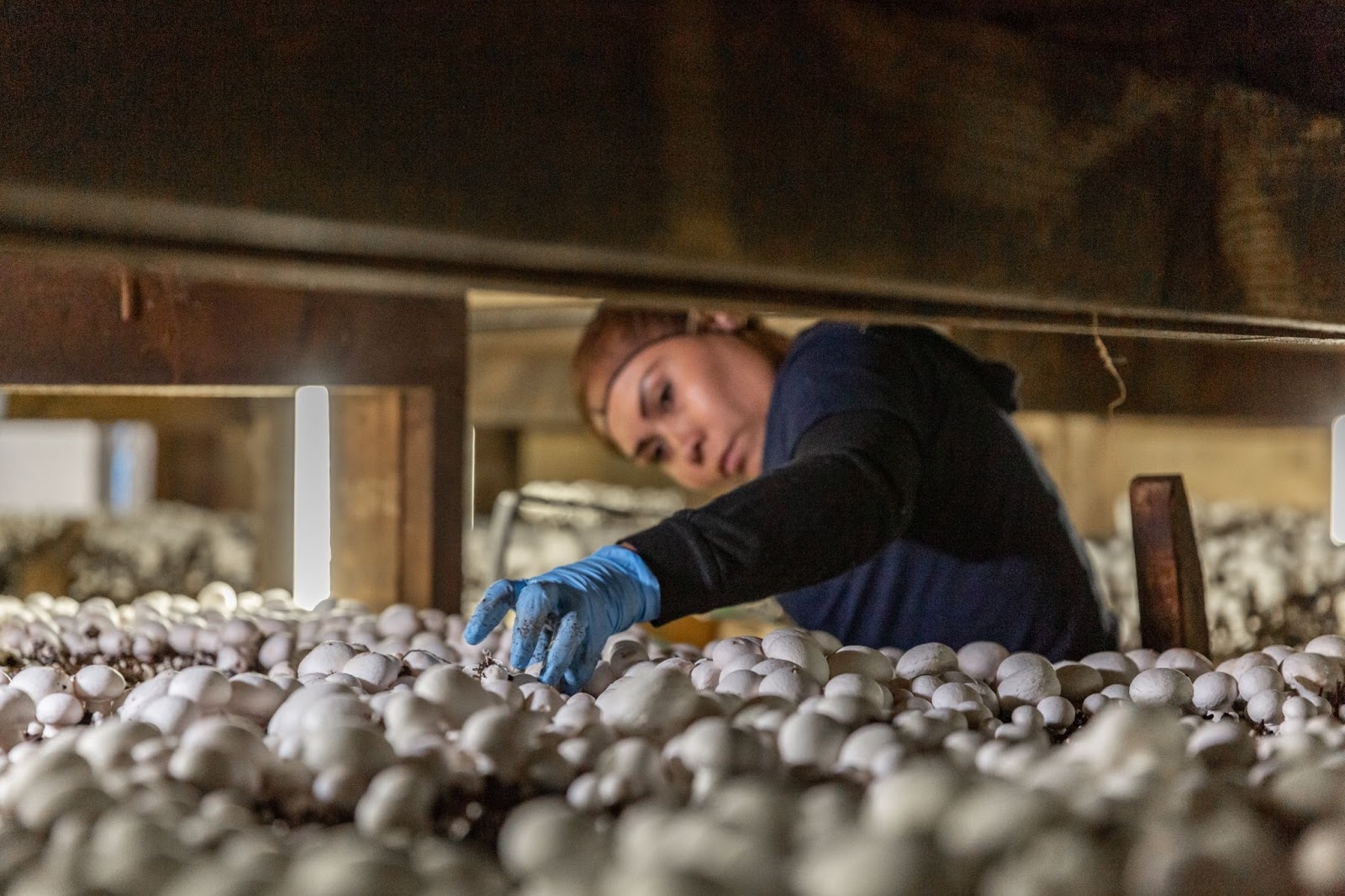 Each mushroom is harvested by hand. They mature at a varying times, and will be harvested for two to three weeks to fit customers’ needs. 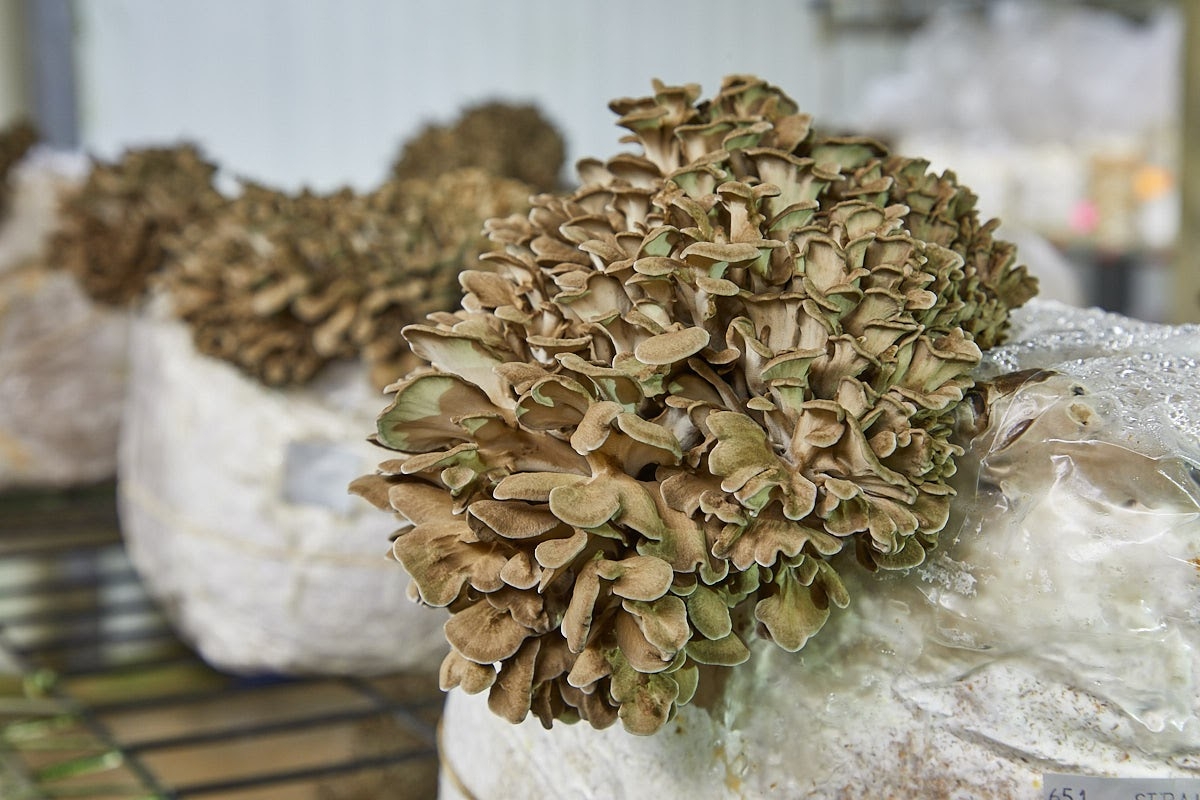 Specialty mushrooms like Shiitake, Oyster, Maiitake and others are grown a bit differently than the common white and brown button mushrooms. In general, these mushrooms are grown on logs or in bags The process of inoculating logs requires mycelium (spawn) to be placed inside the growing medium, whether natural or synthetic and then climate-controlled (temperature, humidity, light, and air). The ideal growing conditions for mushrooms are around 70 degrees Fahrenheit and greater than 90% humidity. Natural logs work well and oaks and maples serve as the best hosts. For natural logs, it is best if the log is newly cut so that it hasn’t dried out. Synthetic logs are just bagged mixes of sawdust, millet, rye, and water to keep feeding the mycelium.

Growing mushrooms is a unique blend of recycling, science, and efficacy. This powerful combination makes them one of the most sustainably produced foods in the U.S. Mushroom growers are known as ‘ultimate recyclers’ for their ability to convert byproducts and waste from other sectors of agriculture—the corn cobs, hay, straw, manure, etc—into the compost to grow mushrooms. Because of this recycling of other agriculture crops and byproducts, mushroom farms have a smaller environmental footprint than almost any other farm.


By any measure of water and energy inputs, and the low-CO2 emissions, mushrooms are a nutritious food that have a very small environmental footprint. More than being the "ultimate recyclers," mushroom growers are providing a sustainable, smart food source for a growing world population.

Full of powerful nutrients, mushrooms are increasingly begin named as a must-have on healthy plates, providing many of the same nutritional benefits as vegetables, as well as attributes commonly found in meat, beans, and grains. 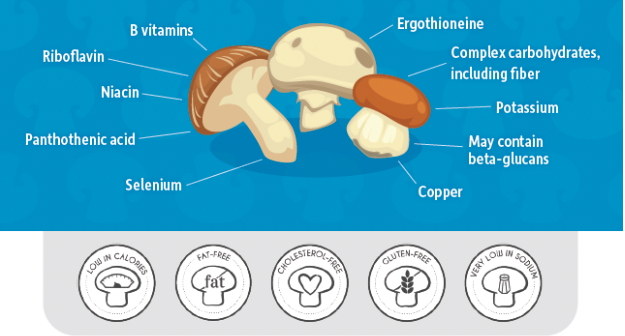 When it comes to health, researchers are increasingly turning to mushrooms.

Fight Against Cancer: Early studies show mushrooms might be a factor in reducing levels of PSA in prostate cancer patients and help prevent recurrence of hormone-dependent breast cancers.

Anti-aging: Mushrooms contain ergothioeine and glutathione antioxidants which work to protect the body from stress that can cause visible signs of aging and may also help prevent symptoms of Parkinson’s and Alzheimer’s.

Cognitive Decline: Researchers are finding that less than one cup of cooked mushrooms twice per week can help to reduce the odds of mild cognitive decline.

Mushrooms and the Economy

Mushrooms are big business in Pennsylvania—they are the #1 cash crop in the state. From Philadelphia to Phoenix, chances are, if you eat mushrooms on your pizza, in your salads, or as part of your burgers, they were grown on a Pennsylvania mushroom farm. The state leads the nation in mushroom production, with more than 50 commercial mushroom farms growing more than 500 million pounds of mushrooms each year.

All in the Family

Pennsylvania mushrooms growers have William Swayne to thank for the long tradition of mushroom growing in the area. A successful florist in Kennett Square, PA, in the late 1800s, he conceived the idea of growing mushrooms beneath his greenhouse benches. The results were encouraging enough that he decided a separate building would make it possible to control the growing conditions for mushrooms. He built his first mushroom house in the are and made it a commercial success. Soon, others joined in their own mushroom growing businesses and the ‘Mushroom Capital of the World’ was born.

Today, many of the Pennsylvania mushroom farms are owned and operated by local families, and in many cases, are multi-generational mom and pop farms passed down to sons and daughters, nephews and cousins in third, fourth, or even fifth generations.

Visit the Mushroom Growing Tent at the Festival to meet mushroom farmers!

Now that you know All About Mushrooms